Editor’s note: This article by Lee Pace was originally published in the October 2019 issue of the Rams Club’sBorn and Bred magazine.

Suzy Whaley loved the game of golf, but during her days as a Carolina student and member of the Tar Heel women’s golf team in the late 1980s, she never envisioned the sport as the bedrock to her future. She was going to take her degree in economics in 1989 and go to law school.

“We’ve laughed about the fact that pro golf never seemed to be in the picture,” said Donna Andrews, a Carolina teammate and later a six-time winner on the LPGA Tour. “We didn’t think Suzy had any desire to play professionally.

“Then next thing I know, she’s out on tour with me.”

And blink again, here’s Suzy in 2019 as president of the PGA of America, a 28,000-member organization of the men and women who run golf shops, give lessons, organize tournaments and promote the game and keep it running across America.

“For Suzy to win over the trust and make her way to the top of such a large organization, a large, male-oriented organization, is just amazing,” said Jan Mann, the Tar Heel women’s golf coach since 2009. “She radiates enthusiasm. Her organizational skills, her speaking ability, her vision for the game — wrap them all up in one person and she has been perfect to lead the PGA.”

The golf course at Carolina during the era of Suzy McGuire (she later married a Connecticut golf pro named Bill Whaley) was known as “Finley Flats” for its bland topography and its propensity to turn into a lake after a heavy rain. The Tar Heel women’s golf team was headquartered in a small room in the original Finley clubhouse, and the girls’ only access to strength and conditioning was to follow the exact regimen of the Carolina football team.

Despite the “have not” elements of the era, Whaley reflects warmly on that time at Chapel Hill.

“We had the best time,” said Whaley. “Dot Gunnels was our coach and was a wonderful woman. Her words of wisdom were, ‘Y’all have fun!’ That made us smile and made us laugh. It took the edge off.”

Whaley reconnected with Carolina, the Tar Heel golf program and the athletic department a quarter of a century later when her daughter Kelly was on the golf team. Kelly played from 2015-19 and in late 2019 was competing for her playing status on the 2020 LPGA Tour. Suzy was impressed with the 1999 makeover of Finley Golf Course by Tom Fazio, the Chapman Golf Center used by the Tar Heel men and women’s teams and coaches, and the academic support, strength training and equipment resources now available.

“Kelly had such a wonderful experience,” Suzy said. “I know that Kelly, just like me, through the rest of her life will realize what a special moment in time this has been for her. We’ll both always wear light blue. “I don’t think you can ever say thank you enough or be grateful enough for the opportunity to receive an education from an institution like the University of North Carolina. I received a scholarship there and my daughter received a scholarship there. You can’t take away the confidence it gives you — you can’t take away the pride it gives you and the inherent need to give back — because you see quickly those opportunities are not afforded to everyone.”

Suzy grew up outside Syracuse, New York, and began playing golf at the age of nine when she was at a club swimming pool with a group of boys and they asked if she wanted to go to the driving range and hit golf balls. Which she did — in her swimsuit, prompting a phone call to her mother, Mary Ann, from the golf pro.

“Instead of yelling at me, she said, ‘Do you like this?’ I said, ‘I love it.’ That’s how my golf got started,” Whaley said. “Mom was looking for someone to play with. You could only play four months a year, but I couldn’t get enough of it. I played three other sports and could not wait for summer to come back around. I loved any kind of athletics, any kind of race, any type of challenge. That was fun.”

She caught the eye of Gunnels, the Tar Heels coach from 1975-93, during some good junior tournament performances and was offered a scholarship. Whaley played from 1985-89 on teams that included Kelly Beck (the namesake of one of Suzy and Bill’s two daughters), Katie Peterson and Andrews. The 1989 team qualified for the NCAA Championships held at Stanford University, the Tar Heels finishing eighth of 17 teams.

“She had a big smile, a big personality and a solid golf game,” said Ed Ibarguen, the Finley head professional at the time. “She was well above-average in her playing ability and made the traveling team her first semester freshman year.”

Whaley took the LSAT in the summer of 1989, then played as an amateur in the McDonald’s Championship in Wilmington, Delaware. She missed the cut by one shot but nonetheless caught the eye of two Connecticut businessmen who offered to sponsor her on the LPGA tour.

“My parents said, ‘You can always go back to law school,” Suzy said. “Why not give it a try?”

By 1993, she was married and had a young family and decided that her time playing golf out of a suitcase had flickered past. By then, the die was cast — the golf industry, yes; law school, no. Her husband was teaching at the Nicklaus/Flick Golf School in Connecticut, which provided an entrée to Suzy into the life of a teaching pro. The bug bit, Suzy thrived and has been teaching golf ever since.

Today she is the director of instruction at Suzy Whaley Golf in Farmington, Connecticut, and in 2018, she became the 370th PGA professional (and only the ninth woman ever) to be certified as a PGA Master Professional, which is the highest educational level offered by the organization.

“Suzy is an outstanding teacher,” said Ibarguen, who left Finley in 1988 to become the director of golf at the Duke University Golf Club and has been deeply involved in PGA leadership roles. “She speaks to the level of the student. If he’s an engineer or a surgeon and wants to get down into force vectors and impact angles, she’s fine with that. Or if it’s teaching a senior golfer who just wants to get the ball in the air, she connects there and will find a way to help them. In a game that in some respects is so overwhelmed with technology, she makes it fun.”

Whaley also found a niche in PGA governance circles, first serving on committees for teaching and coaching and later another for communications. Then she ran for the national board of directors and eventually the association’s presidency. She won office and stepped up in November 2018. Among her initiatives has been to further the growth of the game in general but particularly among juniors, women and minorities.

“Girls golf is our No. 1 growing demographic,” she said. “It’s incredibly exciting. Last year out of 2.1 million new golfers, almost half were women. We’re growing, but we have work to do.

“Minorities are the highest we’ve ever seen. We must look like the communities we serve. We try every day to be welcoming to all and to get messaging out that 70 percent of golf courses around the country are public. That’s rarely written about. And the average cost to play can run about 24 dollars.

“I am very bullish on golf, bullish on the growth of golf. But we’re not where we need to be. We’re getting there, but we have more work to do.”

Her energy and skills have been noticed — especially by those who knew her three decades ago.

“Having a woman in that role is outstanding,” Andrews said. “She’s been very instrumental in a big push for growing junior programs. I am so proud of her, what she’s accomplished and how tirelessly she’s working to grow the game of golf.”

“She is so committed to the whole concept of bringing diversity and inclusion to the PGA of America, an association and a sport that needs to begin to look more like this country,” said Ibarguen. “I have seen a lot of good presidents come and go, but Suzy is unique in having an incredible sense of tact but at the same time being incredibly direct. She navigates these meetings of high-profile, type-A golf pros with incredible skill.”

Whaley’s already hectic schedule has been further challenged by wanting to follow and help Kelly in the early stages of her pro career. The Whaleys traveled to Mission Hills, California, in August for Stage 1 of the LPGA Qualifying Tournament, with Suzy carrying Kelly’s bag. Kelly had a good week and advanced to the next stage.

“When I played, the game was really domestic,” Suzy said. “Today, it’s a global sport. Kelly is literally competing against the world. As a mom, it was really a proud moment. I know how hard that Q-school is. I’ve been through it. It’s survival of the fittest. It’s a mental endurance test. All of them are physically capable. It really comes down to who has it between the ears and how many putts can you get in the hole. It’s been fun to watch Kelly work so hard and compete against so many women with amazing games.”

And it’s a far cry from her days as a junior golfer when Suzy’s access to many golf venues was restricted — simply because she was female.

“It was a struggle for my mom to get me access and to explain to me why the boys could play when I couldn’t play,” she said. “Most places, I couldn’t play but on Mondays.”

Many things have changed since then. And if Suzy Whaley has her say, more changes are coming. 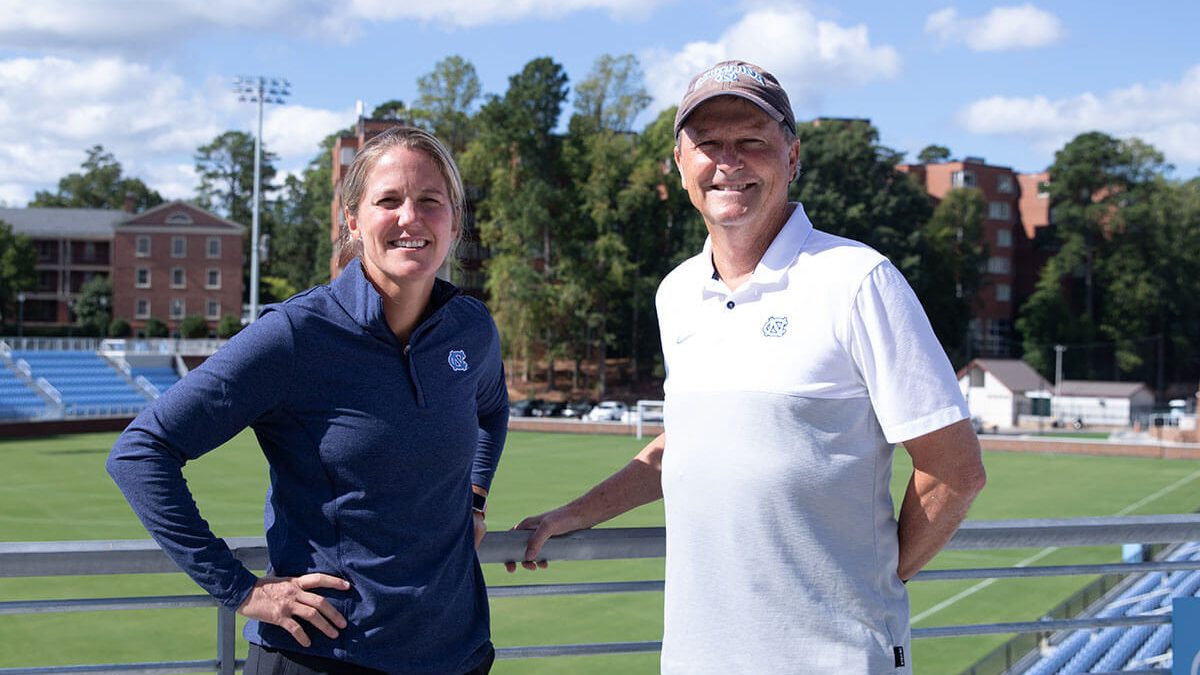 Anson Dorrance and Courtney Banghart joined the Carolina Athletic Department four decades apart, but their approach to coaching has brought them together