How did Matthew Wood ’23, a self-professed “rabid Duke fan” with a full ride to the University of Michigan, end up at UNC-Chapel Hill?

“Putting it simply,” Wood said, “I wouldn’t be attending UNC if it wasn’t for the Carolina Covenant.”

In high school, Wood was on the student council. He earned four varsity letters: three in cross-country running and one in track. He appeared in every play or musical, even landing the lead role — “as the one that got murdered,” he laughed — in “The Plot Like Gravy Thickens.” He participated in the Michigan Associations of Student Councils and Honor Societies, where he still volunteers as a camp counsellor every summer. And he’s most proud of being selected by his high school teachers and staff as the Harold P. Rice School Mission Award winner his senior year.

Despite these extraordinary accomplishments, Wood recalls many moments when he couldn’t imagine the possibility of attending college.

“As a first-generation college student from a low-income family, there were many times I felt like that,” he shared. “I attended a high school where 99.9% of students head to college. I knew I could do it academically, but financially, I thought I’d need to stay back and help at home. With the Carolina Covenant, though, I realized I could go to school and earn a degree without my family having to pay a dime. That drives my passion to succeed so much further.”

Wood applied to Carolina on a whim. He knew he wanted to study psychology and that Carolina has one of the strongest programs in the country.

“My family and I went through a lot together, including many struggles,” he said. “More than anything, I want my experience to help other people through their own struggles, and I think psychology is one of the best routes for that.” Wood doubted he’d get accepted to Carolina, and was certain that even if he did, he wouldn’t be able to attend an out-of-state school.

“When I applied to UNC, I didn’t think there was a chance I’d be accepted,” said Wood. “No one from my school had gotten in. When my best friend, who I consider way more academically inclined than I am, didn’t get in, I was like, ‘There’s no way.’”

Wood was sitting on the couch, watching college basketball with his dad, when he received the acceptance letter and found out he had been awarded the Carolina Covenant.

“I freaked out. I almost started crying, thinking ‘This is real!’ My mom didn’t believe me, she was like, ‘Why would UNC do that?’ It felt almost too good to be true.”

But he didn’t want to get his hopes up because there were still a few hurdles in his way, including a competitive offer from another university. He had also received the Go Blue Guarantee for a full ride at the University of Michigan.

“UM also has one of the best psychology programs in the country,” Wood said. “I was deciding between UNC and UM — no matter what, I couldn’t lose — but I’d never set foot in Chapel HIll, and I couldn’t afford to come down for a tour.”

Wood’s high school counsellor suggested he call the UNC Office of Scholarships and Student Aid to see if anything could be done.

“I couldn’t believe it,” Wood said. “They paid for my hotel and said if I could find a way to get here, I’d be covered for the weekend. They even made accommodations for my dad and best friend to come with me.

“Once I realized UNC was willing to go out of the way for me to tour campus, I truly felt wanted here at Carolina — something I did not feel at other universities. I felt like I wasn’t just a number and that, clearly, if I ever needed anything, I’d have people to go to. It was kind of overwhelming, but awesome.”

That support network was critical for Wood when his mother passed away early in his first year at UNC.

“The Carolina Covenant were the first people I reached out to,” he said. “They invited me to breakfast, and I got to meet the people involved in the program. They recognized the effort I was putting in and helped me navigate taking a medical underload.”

Now in his junior year, Wood is thriving at Carolina. He’s double majoring in psychology and Human Organizational Leadership and Development (HOLDOpens in new window) — a new interdisciplinary bachelor’s degree program housed in the UNC School of Education that builds upon scholarship in education, social science, policy, analytics and leadership.

Beyond his studies, Wood is honing his leadership skills as the national communications coordinator of the UNC Residence Hall Association’s executive board. Last year he received the William D. Porterfield Award for his exceptional leadership and service to residence hall governance at the national level. In his spare time, Wood participates in club sports and is now a self-professed “huge Carolina sports fan” ― he challenged himself to attend every Carolina home football and basketball game this year. He enjoys spending time at Woolen Gymnasium and hanging out with his friends — including two fellow Carolina Covenant Scholars, Ashlyn Clark ’23 and Kyla Kurosawa ’23, whom he met at his first scholarship event in his first year at UNC.

“That event is where some of my best friendships were born,” Wood said. “Ashlyn is one of the only people who’s ever been to a WWE wrestling event with me — something my dad and I enjoy back home.”

He shared that he’s “a music nerd who’s really good at bad karaoke” and a trivia buff who won a morning radio show contest 16 days in a row when he was in high school.

“I think I might still be their ultimate champion,” he laughed. “I won a bunch of gas cards and a White Castle gift card, and they followed up with me and gave me a graduation present. I’m like their little brother on this radio show back home.”

After graduation, Wood said he would love to continue on his path to becoming a counsellor and go to graduate school. “But I’m nervous because there isn’t a Carolina Covenant for grad school, and I want to find a way to do it debt-free.”

In the meantime, Wood said he has to pinch himself all the time.

“I have this opportunity to go to college. It’s not easy. I’m still navigating this new world on my own. But I get to live somewhere; I get money for food, books, things I don’t have to go to my family for. I get to attend one of the most prestigious universities in the country, and I’m going to graduate debt-free. That’s crazy!”

Gifts to the Carolina Covenant count toward Carolina’s bold goal to raise $1 billion for scholarships by December 2022. Support students like Matthew by making a gift today! 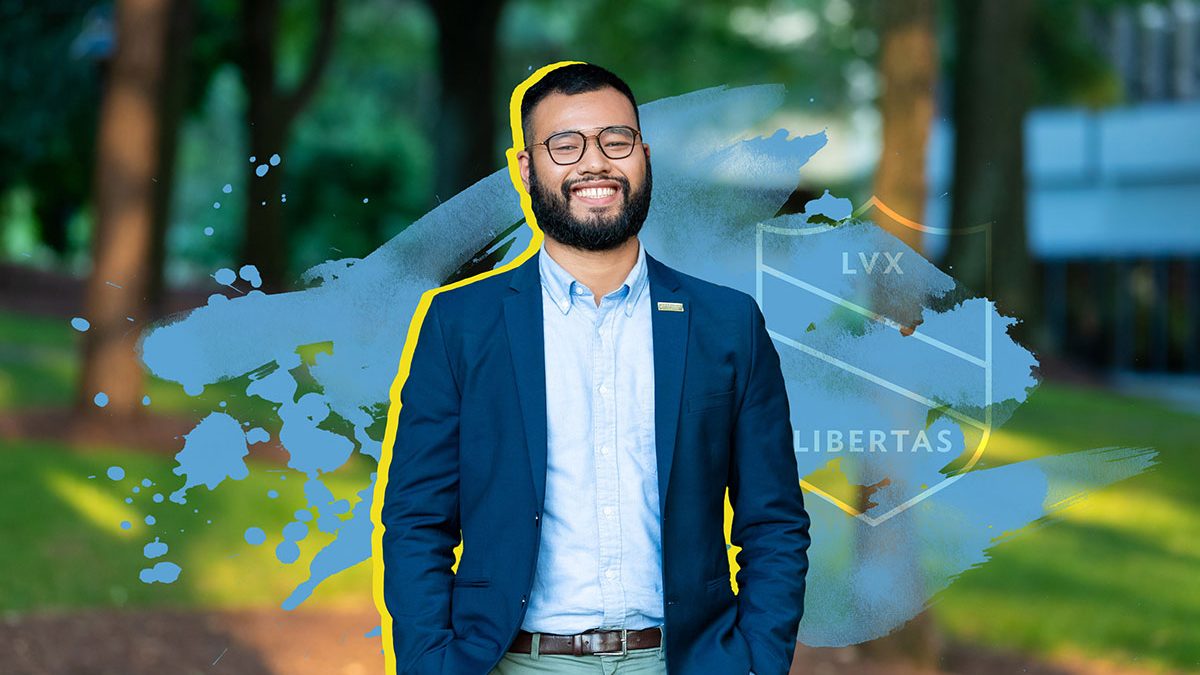